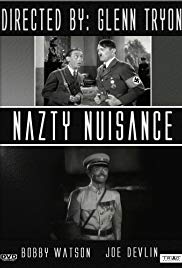 Germany’s Adolf Hitler, with his Axis-stooges, Italy’s Mussolini and Japan’s Suki Yama, although he tried to avoid taking them, is on his way, via submarine, to a tropical country to negotiate a treaty with the High Chief Paj Mab. However, an American P.T-boat crew is already there and have some plans for schickenbit-grubber and his buddies.