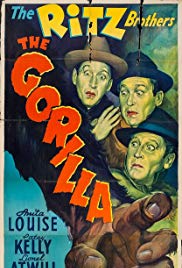 The three Ritz Brothers are fumbling detectives prowling an old dark house haunted by Bela Lugosi, an insane murderer and a giant gorilla..

When a wealthy man is threatened by a killer known as The Gorilla, he hires the Ritz Brothers to investigate. A real escaped gorilla shows up at the mansion just as the investigators arrive.