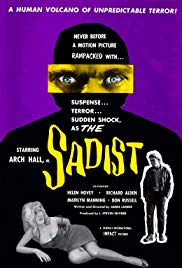 This is believed to be the first feature film based on real life serial killers Charles Starkweather and Caril Fugate. Mainstream Hollywood would not produce films inspired by the pair until a decade after this one….

Three people driving into Los Angeles for a Dodgers game have car trouble and pull off into an old wrecking yard where they are held at bay by a bloodthirsty psycho and his crazy girlfriend.