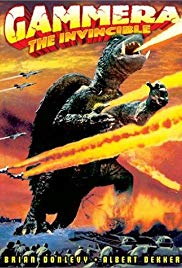 An atomic explosion awakens Gammera–a giant, fire-breathing turtle monster–from his millions of years of hibernation. Enraged at being roused from such a sound sleep, he takes it out on Tokyo.

This was the only film in the original Gamera series to be released to American theaters. It was originally presented in America by World Entertainment Corp. and Harris Associates, Inc. who re-named the film Gammera the Invincible….