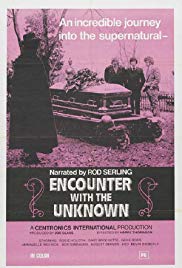 Three eerie tales based on actual events are enacted in this film. First, three college students play a prank on a geeky classmate, who is accidentally shot and killed. His vengeful mother forecasts the deaths of the three young men she holds responsible, on 7, 14, and 21 days hence. And, one by one, her grim predictions come true. Next, a ghoulish sound emanates from a mist-shrouded hole in the Earth near where a Missouri boy has lost his dog. The boy’s father is lowered into the hole and lets out an agonizing scream! Finally, a senator returning home from a party finds a lost girl on a bridge and learns from her father that she died years earlier!