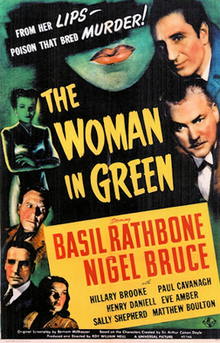 The Woman in Green is a 1945 American film, the eleventh of the fourteen Sherlock Holmes films based on the characters created by Arthur Conan Doyle. Directed by Roy William Neill, it stars Basil Rathbone as Sherlock Holmes and Nigel Bruce as Dr. Watson, with Hillary Brooke as the woman of the title and Henry Daniell as Professor Moriarty. The film follows an original premise with material taken from “The Final Problem” and “The Adventure of the Empty House.”