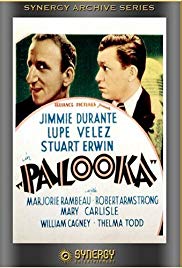 Palooka is a 1934 comedy film based on the comic strip by Ham Fisher. Joe Palooka (Stuart Erwin) is a naive young man whose father Pete (Robert Armstrong) was a champion boxer, but his lifestyle caused Joe’s mother Mayme (Marjorie Rambeau) to leave him and to take young Joe to the country .